Check out the below articles for Jetco-specific updates. Looking for the latest news and CEO Brian Fielkow’s most recent articles on the trucking and transportation industry? 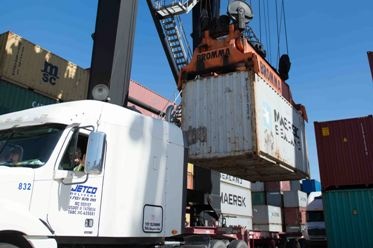 What You Need to Know.

The hot topic in the Texas shipping and logistics world is the changes in the state’s container weight laws. In every legislative session, proposals are made to increase legal weights for containerized cargo. Thus far, none have passed. In January, Brian Fielkow, Jetco CEO, outlined the case for and against increasing ocean-going truck weights from 80,000-84,000 pounds to 97,000 pounds gross vehicle weight. Having been TXTA intermodal chairman from 2011 to 2015, Brian has deep experience with this important issue and is recognized as an expert in this field. While many states already have higher container weights in place, Texas is considering the options when it comes to safety, jobs and the economy, and our infrastructure. And, opinions vary.

As a starting point, a bill was introduced in the Texas legislature in 2015 to increase weights for ocean-going cargo to 97,000 pounds gross vehicle weight. The 2015 proposal sought to raise the container weights to 97,000 pounds: 20,000 lbs./axle; 40,000 lbs/tandem; 60,000 lbs. per tri axle. This would mean there would be routes to avoid – particularly defined bridges and roads that cannot handle this kind of weight.

We expect this bill (or something similar) to be raised in the 2017 legislature session. So, now is the time to start thinking about its implications. Here are the arguments that Brian presented in favor and against heavier container weights:

Jobs and the Economy

It comes down to some basic questions. The growth is on its way.

Now is the time to educate yourself on what it means if a law is passed allowing heavier container weights. From safety, to jobs and our infrastructure, this debate has a great impact on Houston.

Get Jetco News Delivered to You